I’ve been wanting to do this Everdrive GB review forever now. It’s almost a miracle that I’m finally getting to it. Since things are finally slowing down in my home life (new kid being born) I can get finally get back to more consistent blog writing! So that means more retro game reviews, tech reviews, and more! Be sure to hit up the email subscribers list so you never miss another post!

You should join my discord community so we can continue talking about retro games and more!

Let’s begin with a simple question at first that some of you might not even know.

What is an Everdrive?

The Everdrive is a popular brand of flash cartridge that allows you to load original software from an SD card on a real game console such as the Super Nintendo or Sega Genesis. It can be used to play original ROMs, homebrews, ROM hacks and even new translations of games that were never released in a particular region. You can store every single game ever released for the system on an SD card and have the entire library at your fingertips at any time. A menu screen lists all of the games on the card and allows you to select and play any game you wish, and as far as the console is concerned it is just like playing from the original cartridge. 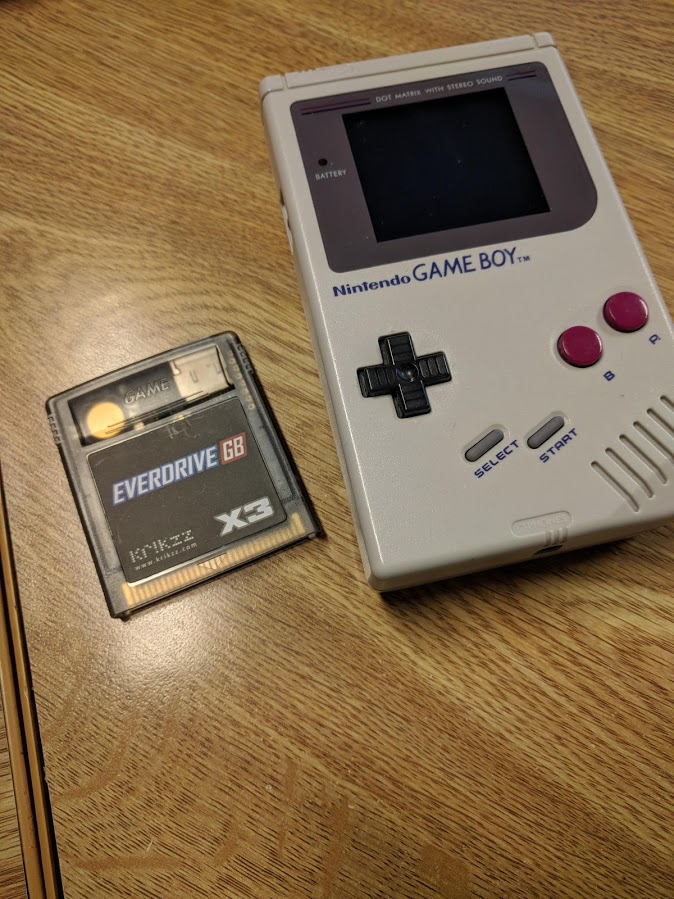 The Everdrive is one of the simplest flash carts I’ve ever seen to set up. Format your SD card as FAT32, create folders for your roms and copy your games to the card. Then simply plug the cartridge into your Gameboy, select a game and play.

You may need to update the operating system for the Everdrive. Krikkz, the author of the Everdrive, regularly releases updates to fix bugs or add new features. (X3Updates). 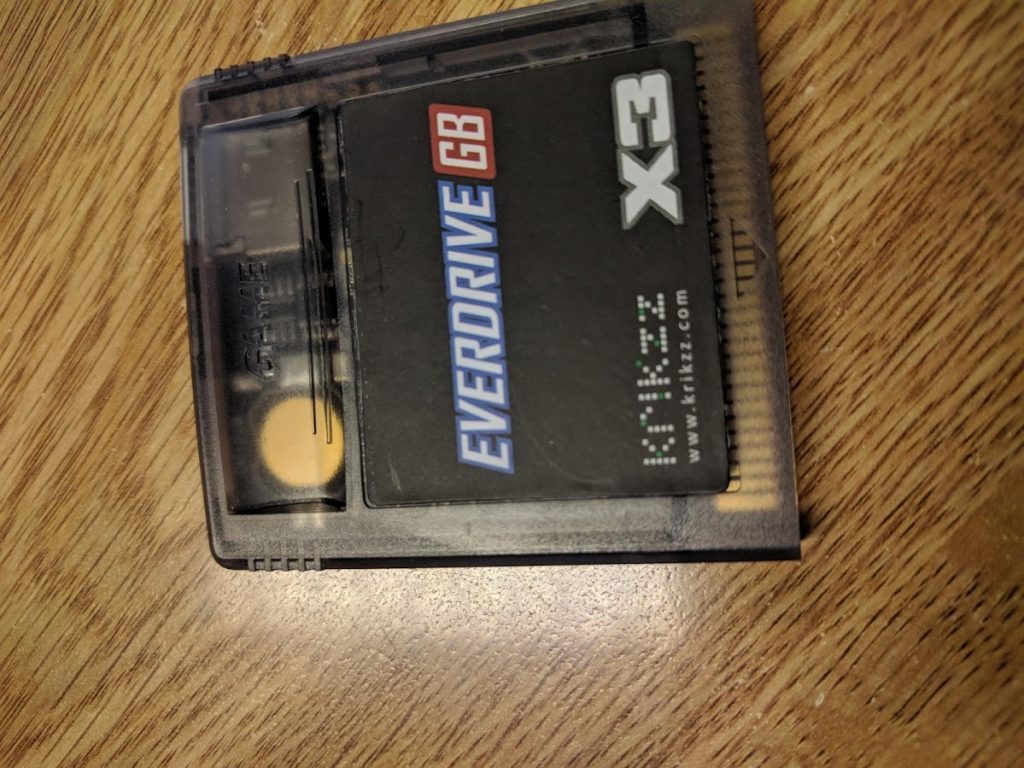 It really doesn’t get much simpler than that. The SD card slot is also spring-loaded so you can easily remove the card at any time and put it back in. It’s dummy-proof for dummies like me that want to stick SD cards in backward all the time. SD cards and USB thumb drives seem like I’m always flipping them around a billion times to get them to fit.

How to Save Your Progress on the Everdrive GB

The Everdrive GB X3 does NOT automatically save your SRAM. This means even if you save your game progress through the game’s menus, the cartridge will not automatically save it to the SD card. This can be kind of confusing and in the manual it tells you that you have to press a button. Now looking directly at the GB Everdrive you might be confused. I know for one I was really confused. There was no BUTTON that I could see, I’m thinking I should be seeing a little red button or something. Something that really sticks out like a button.

So for the first time using the Everdrive X3, I was unable to save. I decided to check out the internet and do some research and found out that the CARTRIDGE is actually the button.

Ok, let me explain: The top part is actually a button you PRESS. Again, this is only for the X3 VERSION of the GB Everdrive. 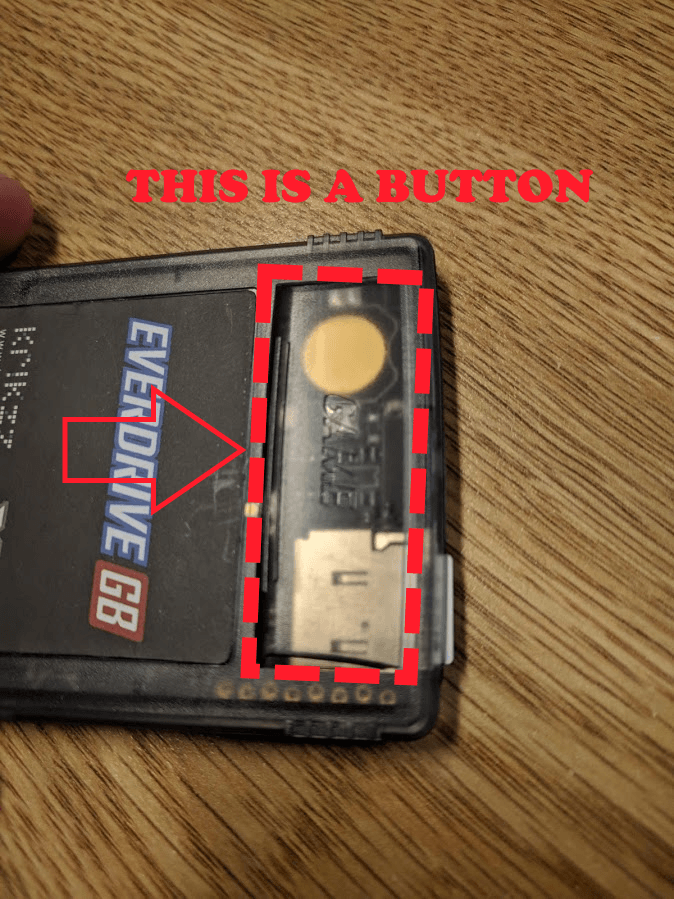 So don’t feel bad if you cannot figure it out, I know I couldn’t at first. This is really the only complaint I really kind of have with this flash cart, and it was simply because I really didn’t know what to do. Pressing the button DOES restart the game and takes you back to the menu where you can select a new game to play. This is kind of similar to the Easy Flash IV method of saving. Only on the Easy Flash you must turn off the system and turn it back on to save your games.

Hopefully, this can clear up the saving process for this Everdrive and maybe for some others you might be having issues with.

There is no real-time clock available in the X3 version of the Everdrive GB. However, that really only affects a few games. Really the only games it can truly effect are some of the Pokemon games. I believe only certain Pokemon can be caught at certain times and this will affect that. That doesn’t mean you still can’t get them, for certain games like Pokemon that require an RTC, you can simply patch the ROM and it will fix most if not all your issues.

If you don’t want to deal with any of that mess (although it is usually not hard to patch) you can purchase the more costly versions of the GB Everdrive which I really think is unnecessary. But I’m all about saving money whenever I can and I don’t think its THAT important since I rarely if ever want to play Pokemon games. However if you do want the real-time clock feature look to the Everdrive GB X7.

The Everdrive GB X3 does not support save states. That is, saving your game at any point bypassing the game’s own save system. For this feature you would need the Everdrive X7.

This Everdrive really supports just about any game you would want to play. Including some hacked ROMs even; you’ll have to test them for yourself though and I can’t promise that they all will work. Most if not all the retail Gameboy and Gameboy Color games will work on this. Like I said above VERY FEW required an RTC to “100%” complete them.

You really shouldn’t have any issues with this device as I haven’t, of course, this was after FIGURING out how to really save with this device. I’ve tried most of the USA versions of games including even different versions and they all seem to work just fine for me. I haven’t noticed anything out of the blue or weird going on. Everything really works as intended and it’s great to be able to carry around the full GB library in your pocket if you want.

Some games do take a little while longer to load and flash to the cart; that is because the Game Boy really isn’t a super-fast device. So bigger games might take a little bit longer but for the most part, it all works pretty quickly and almost instantly.

I’m still waiting for a Super Game Boy for my Super Famicom so I can enjoy these on a nice TV! 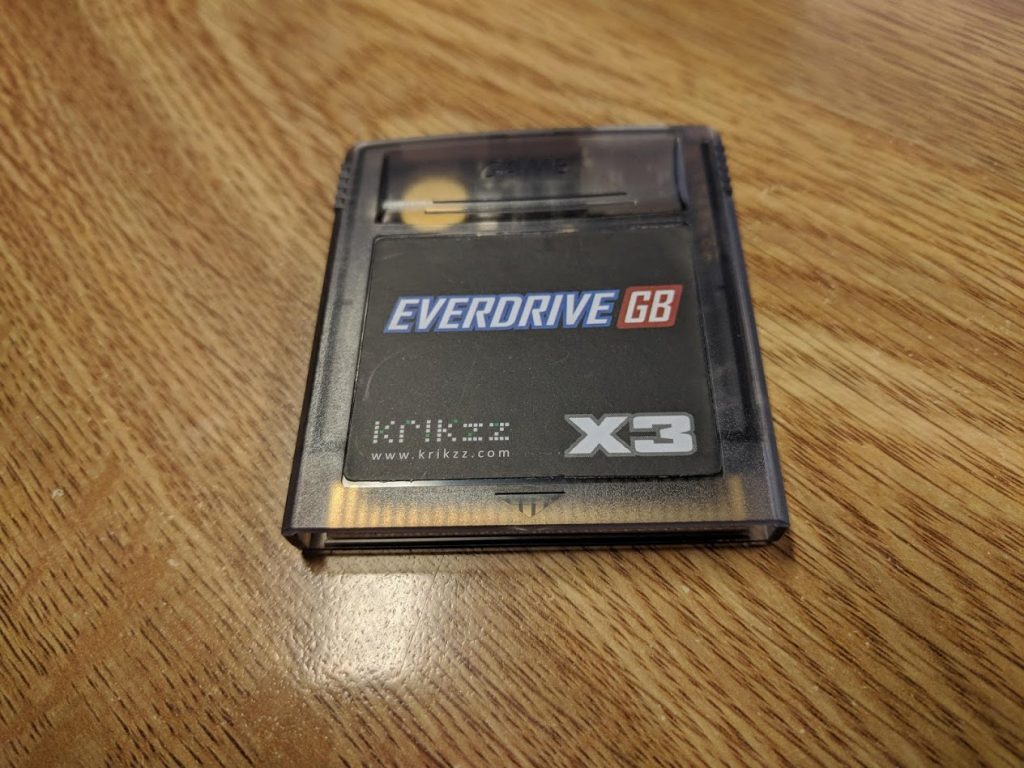 It’s a see-through cart. It fits really snug into the Game Boy as well.

The Everdrive isn’t hard to get out or anything either. I really dig the see-through look of the Everdrive as well, letting you see all the circuits and electronics going on. You can see a red LED light up whenever it is flashing the cart so you know not to try to jerk the cart out and brick it. This is a terrific design and really mimic a real and authentic Game Boy Cartridge with a little extra flair of being transparent.

The Everdrive GB X3 is a solid flash cart. I don’t regret purchasing it at all, it is very handy Everdrive and for the price point, it is really worth it. I really wish stuff like this was available whenever I was younger and able to CARRY AROUND the whole Gameboy library on one single cart. The only real concern is not having an RTC and like I’ve said It literally doesn’t bother me at all. It’s easy to access, it is easy to add ROMs, and it is easy to update. What more could you really ask for? If you are looking to bring back that dusty ol’ DMG-101 out of the closet and see if it still works. Then you should totally get the Everdrive GB X3. I highly recommend it for anyone wanting to relive some of their Gameboy childhood.

Where to Purchase the Everdrive GB X3

There are several places where you can get the Everdrive GB X3 as well as Everdrives for many other systems. Please stay away from websites like Aliexpress for flashcarts like this as they are often fake and don’t work most of the time. Some of the bad flashcarts have been known to completely ruin hardware. So just fair warning.

The first place I would check is directly from Stone Age Gamer. This is where I purchased mine at and it is a great website for flash carts. You can also buy the carts directly from Krikkz, though shipping from the Ukraine may be slow depending on where you live.

You can always go to Amazon as well, but If I’m being honest Stone Age Gamer is the best place to order it. – (https://amzn.to/2AcSOt9)

Also, this is 100% totally legal to own. ROM distribution is what is illegal whenever it comes to retro gaming but there is nothing illegal about owning flash carts.

After you get a nice Everdrive you should Mod Your Original Game Boy.

I hope you’ve enjoyed this Everdrive GB review. I plan to do much more on video games and other flash carts and technology I have laying around. I do have a YouTube Review Channel which I will be doing a video on stuff like this and gaming reviews. It hasn’t launched just yet but I’ll be working on it coming in 2019.

Be sure to follow me on Twitter if you have any questions and keep up to date on the website! You can also join the newsletter email list if you want there should be a link somewhere on the sidebar of the website! If you are on a phone you might have to scroll down to almost the main bottom to see it. I hope you come back and leave a comment in the comment section down below and let me know if you got the Everdrive!